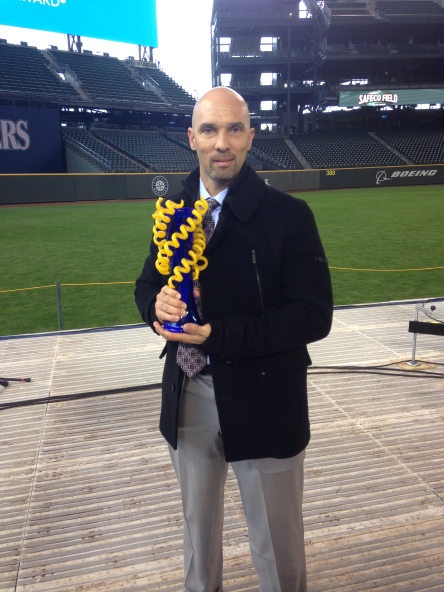 Raul Ibanez was presented with the 2014 Hutch Award today at Safeco Field.

Today at Safeco Field, longtime Seattle Mariners player, and one of the most-liked player in Major League Baseball, Raul Ibañez, was presented with the 2014 Hutch Award.

The award is given each year to an MLB player who best exemplifies the honor, courage and dedication of baseball great Fred Hutchinson, both on and off the field. Baseball Hall of Famer Rod Carew gave the keynote address and a silent auction helped raise money for the  Fred Hutchinson Cancer Research Center.

Here is a great article written by Bob Dutton of the Tacoma News Tribune on Ibañez winning the award. 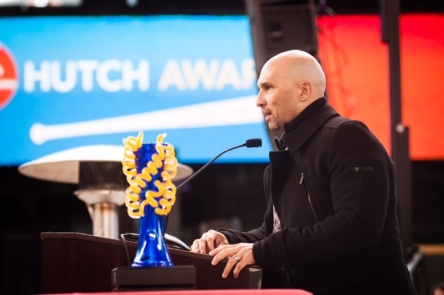 Yesterday was a busy day with Hisashi Iwakuma selected as a finalist for the AL Cy Young Award and the Mariners naming Lloyd McClendon manager. Perhaps the best news of the day (while the other two were certainly great) came when Raul Ibañez was named the Hutch Award Winner.

The award is given each year to an MLB player who best exemplifies the honor, courage and dedication of baseball great Fred Hutchinson, both on and off the field. Baseball Hall of Famer Rod Carew will give the Hutch Award Luncheon’s keynote address; proceeds from the event will benefit cancer research at Fred Hutchinson Cancer Research Center. Ibañez will receive the 49th annual Hutch Award®  at a Jan. 30 luncheon at Seattle’s Safeco Field.

Here are just a few of the wonderful accomplishments by Raul as outlined in the news release sent out by the great people at the Fred Hutchinson Cancer Research Center.

Ibañez has received the MLB Players Association Heart & Hustle Award three times and has four times been the Mariners nominee for the Roberto Clemente Award, baseball’s highest honor for community service. The Sporting News named Ibañez one the “Good Guys” in sports and he also received the Tug McGraw Good Guy Award from the Philadelphia chapter of the BBWAA.

Ibañez is as widely respected for his accomplishments on the field as he is for his character, leadership and community involvement.

He also serves as a spokesman for “Refuse to Abuse,” the Mariners’ unique partnership with the Washington State Coalition Against Domestic Violence. The program raises awareness of violence in intimate relationships through public service announcements in both English and Spanish.

Have you voted yet? Yes, King County election day is tomorrow (Tuesday, Nov. 5), but while you are thinking of voting be sure to fill out our online ballot for the 2013 Major League Baseball GIBBY Awards (Greatness in Baseball Yearly Awards).

MLB’s A-listers will take home 2013 GIBBY trophies — the ultimate honors of the industry’s awards season — based on votes by media, front-office personnel, MLB alumni, fans at MLB.com and the Society for American Baseball Research.

You can vote by clicking on the follow link: 2013 GIBBY Awards

These Mariners are listed in the following categories:

Must C Moment –  Raul Ibañez put a cap on a strong 2013 season with Seattle when he tied Ted Williams’ record for the most home runs by a player age 40 or older September 21 at LAA. The veteran did so with his 29th long ball of the year — and the 300th of his career.

Mariners Outfielder Raul Ibañez has been nominated for the prestigious Branch Rickey Award which recognizes MLB players for their community service.

Ibañez, who is on his third tour with the Mariners, has always been active in community programs. He was one of the co-chairs of the annual Mariners Care Cystic Fibrosis Golf Tournament, which raised $220,000 this year. During his career with the Mariners, Raul has hosted the charity tournament six times. Over those years, the event has raised over $1.176 million for CF research.

Ibañez has also served as spokesman for the Mariners Refuse to Abuse® partnership with the Washington State Coalition Against Domestic Violence, and is an active participant in Make-A-Wish, which grants wishes to kids with life-threatening medical conditions.

The annual Branch Rickey Award recognizes MLB players for their community service. Raul Ibañez is nominated for this year’s award, which will be given on November 16 in Denver.

Raul was the Mariners nominee and local winner for the Roberto Clemente Award for three consecutive seasons from 2006-2008. In 2006, Raul was also named by Sporting News as one of the “Good Guys” in sports and was a nominee for the Major League Baseball Players Association’s “Heart & Hustle” Award. In 2011, as a member of the Philadelphia Phillies, he received the Tug McGraw Good Guy Award from the Philadelphia chapter of the Baseball Writers Association of America.

Former Mariners pitcher Jamie Moyer won the Branch Rickey Award in 2004, and R.A. Dickey, who pitched for the Mariners in 2008, received the honor in 2012.

The annual Branch Rickey Award is named for the former Brooklyn Dodgers executive credited with breaking baseball’s color line in 1945 when he signed Jackie Robinson to his first MLB contract. The award is sponsored by the Rotary Club of Denver. The chief benefactor of the annual banquet is Denver Kids, Inc., a program that counsels and mentors at-risk youth in Denver Public Schoools.

Throughout the season, Mariners broadcaster Aaron Goldsmith will provide content on From the Corner of Edgar & Dave, giving a behind-the-scenes look at the Mariners players and organization. In this installment Aaron shares some interesting tidbits about tonight’s match-up between the Angels and Mariners, as well as between Raul Ibanez and LA stater Jeff Weaver.

The Mariners and Felix Hernandez face veteran right-hander Jered Weaver Saturday night following an impressive 8-3 win over the Angels in Game 1. Weaver, 30, is having another productive season despite featuring one of the slowest fastballs in all of baseball. With an average velocity of 86.5 mph, only Kyle Kendrick (85.6), Mark Buehrle (84.3), Barry Zito (82.6), and R.A. Dickey (81.4) throw heat with more chill than Weaver.

Despite dazzling velocity, opponents are batting only .220 off Weaver’s BB gun fastball and in his last start, the 6-7 righty blanked a hot-hitting Red Sox lineup over 6 2/3 innings for the win.

“I tried to stick to my game plan,” Weaver said from the clubhouse Friday afternoon. “I was able to locate off-speed in certain counts and keep those guys off balance.”

For Weaver, his recent success on the mound is nothing compared to the joy of the recent addition to his family. On July 5th Weaver and his wife celebrated the birth of their first child, Aden, named after Weaver’s former teammate and close friend Nick Adenhart who was killed by a drunk driver in 2009.

“About three or four days after he passed away, he was supposed to move in with me. He was one of those guys I wanted to take under my wing and teach him the ropes. When my son gets to the age where we can explain what his name is all about…I think he’ll be more than honored to carry on his legacy.”

Raul Ibanez at the plate.

As if he didn’t already know, Weaver got a front row view Friday night of what Raul Ibanez has accomplished in the first half of the season. Raul, who clubbed his 23rd and 24th home runs of the year in Game 1, is a career .467 hitter (14-for-30) against Weaver with four homers. In fact, there’s there’s no pitcher Ibanez has homered off more than Weaver, and no team more than the Angels (23 HR).

Ibanez is now 4th all-time for homers by a 41+ year-old (passing Darrell Evans) and is aiming at the record of 29 set by Ted Williams.

It was a busy day for several Mariners players prior to tonight’s game vs. the Yankees. Four players (Tom Wilhelmsen, Charlie Furbush, Lucas Luetge, Brandon Maurer) took over the MLB Fan Cave, and Michael Morse and Raul Ibanez were guests at the MLB.com headquarters to participate in the Edward Jones Chatting Cage.

We’ll post some video and more photos of the two visits later, but here a few quick pics of the guys from this morning. 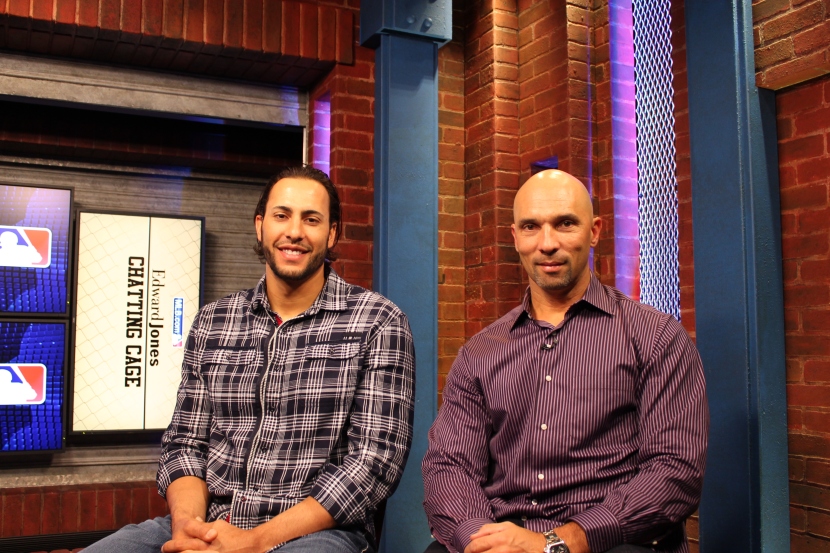 The first edition of Mariners Magazine (Volume 24, Issue 1) featuring Michael Morse and Kendrys Morales is now available for purchase throughout Safeco Field and at any of the five Mariners Team Stores. You can also subscribe to Mariners Magazine and have it delivered to your home.

The 2013 edition of the Mariners Yearbook featuring cover boys Kyle Seager, Felix Hernandez, Raul Ibañez and Dustin Ackley has also been published and is available at Safeco Field and Mariners Team Stores.

Raul Ibañez and his son RJ make up a bed in the Plaque Room at the Baseball Hall of Fame for an Extra Innings Overnight sleepover.

Mariners outfielder Raul Ibañez and his son RJ had a sleep-over at the National Baseball Hall of Fame and Museum, and they had such a good time that Raul decided to give the Hall a piece of baseball history.

The Museum has an Extra Innings Overnight program where fans can spend the night. Back in November 2011, Raul, RJ and RJ’s youth baseball teammates had a slumber party in the Hall of Fame Plaque Gallery.

The outing was so special that Raul decided to donate the bat he used to make history in the American League Championship Series with the Yankees last fall. You may recall October 10, 2012, when Raul became the first player in history to hit two home runs in the ninth inning or later of a postseason game, giving the Yankees a win over the Orioles.

Raul wanted to share a souvenir of that great night in recognition of the great night he and RJ had at the Hall. Here’s what Raul said about the donation of the historic bat:

“It meant such a great deal to go through the Museum with RJ and tour through the game’s treasures, knowing that the Hall of Fame is where the game’s greatest stories are preserved… Knowing that the bat that I used from the one moment in baseball history is going to be in Cooperstown forever is just so great. I’m honored to have anything of mine attached to the Hall of Fame.”

Raul Ibañez at the “Chasing the Dream” exhibit at the Hall of Fame that tells the story of Henry Aaron’s career.

While the news has been out there since before Christmas, we were able to finally announce the signing of outfielder Raul Ibañez to a one-year contract today. And for those wondering, we’ve already been able to confirm that Raul will wear his familiar #28 the next time he takes the field for the Mariners.

“We spoke of adding some veteran presence to our ball club this off season,” said Mariners General Manager Jack Zduriencik. “In Raul we have a player and person with outstanding leadership skills who has participated in post season play the last several years. We will give Raul the opportunity to come in an compete and add an additional veteran presence to this ball club.”

“Raul is the ultimate professional both on and off the field,” said Mariners manager Eric Wedge. “His veteran presence will be invaluable to our younger group of players.”

Ibañez was originally selected by the Mariners in the 36th round of the 1992 June Draft out of Miami-Dade Community College. He made his Major League debut on Aug. 1, 1996 vs. the Milwaukee Brewers.